I’ve been tied up with the book for the last few months and am taking time to dig back through the press coverage for the Fall 16 season. I was intrigued by this Priya Elan article from The Guardian, dated September 9th, where he reports that the over-the-knee boot is poised to become the footwear of the decade. That’s quite some claim to make, and I thought it was worth digging into in a little more detail.

Elan’s thesis is that for the last 5 decades, each major era of fashion has had its iconic piece of fashion: “the 60s had the Birkenstock, the 70s had the platform boot, the 80s had the stiletto, and the 90s the Doc Marten.” For the current decade, Elan picks the over-the-knee boot, based on its widespread popularity across a variety of trend-setting personalities.

To be honest, there’s not a lot more to it than that. The “lampshading” trend, Kim Kardashian, Beyoncé, and – improbably – Theresa May, are all mentioned, as is the obligatory reference to Julia Roberts in Pretty Woman (a movie that is now 27 years old, and surely disappearing below the cultural horizon for any woman under the age of 40). There is a nod to the boot’s flexibility as a style element – “Thigh-high boots are the new pants,” according to MTV Style, apparently, and a rattling off of the various major league designers that have included the boots in their F/W collections. And that’s all, folks.

I shouldn’t be rude – all things considered, it was a prescient piece given that the current fashion season has absolutely confirmed that the OTK boot is a big deal for 2016/17. And while I might take issue with his choice of decadal footwear (you could just as easily make a case for the Pilgrim pump, the Frye boot, the running shoe, and the platform sandal), the sheer ubiquity of the low-heeled, black or grey suede OTK boot in the last 3 months is hard to argue with. But if you want to claim a decade spanning significance for it, you need more evidence. And that’s a place where we can help, I think.

As you can see, there’s a gradual increase in popularity since 2004, and the pattern is basically an annually repeated cycle, with the popularity of the search term peaking in the fall; no surprises there.

Now look at the term “knee-high boot.” At first glance, the two patterns look more-or-less the same, but if you inspect it more carefully, you can see that there’s a slight decline in popularity from 2004 to 2007, which – I think – reflects the decreasing popularity of the dress boots that dominated fashion around the turn of the millennium.

So what about over-the-knee boots? First, I think we can put aside Elan’s assertion that the turning point was 2006 and Ann Hathaway’s Chanel-booted makeover in The Devil Wears Prada (not that this wasn’t a great movie moment to rank alongside Jane Fonda in Klute or Sophia Loren in Arabesque). The pivotal period was the Fall 2009 season, which is the point when ultra-tall boot styles started to attract mass media attention, both in conventional and “new” media, and this is very visible using GT:

Note also how the popularity of the term increases precipitously in the fall of this year. It’s also reflected in the extraordinary number of public figures that have been photographed out and about in OTKs; over 120 in the last month alone (see below). 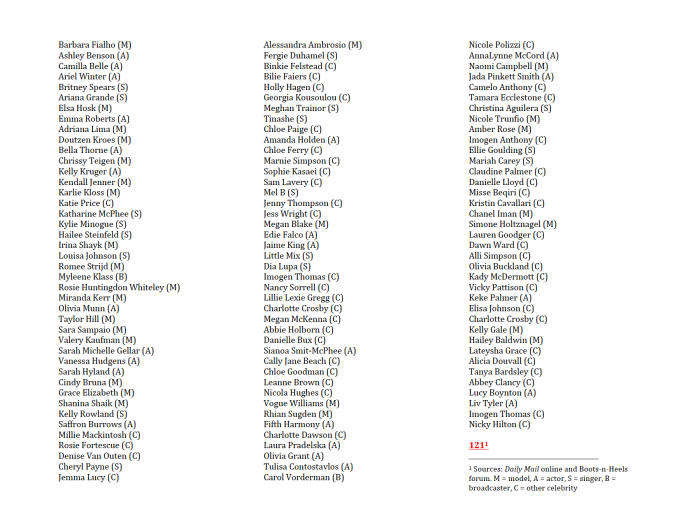 It’s true that high visibility of this style of boot among the rich and famous has encouraged “ordinary’ people to try it, but is it truly a mass phenomenon? My (admittedly ad hoc) surveying of the situation on the streets of New York, Boston, etc., suggests that OTK styles account for maybe 10% of the tall boots worn by women. The vast majority of the remaining 90% are low-heeled, knee-length styles worn over pants or leggings; a look that was termed “The Tuck” when it first appeared in the mid 00s. So, is there a case to be made that the low-heeled knee boot, rather than its loftier, over-the-knee cousin, is the footwear of the decade? I think there may be.

While the thigh-high boot has undergone successive periods of high profile attention in the sixties, seventies, eighties, and nineties, the tucked-in boot has only previously achieved mass popularity once, in the 1970s, and it was not sustained. During the early 00s, before its current round of success, I remember my fellow blogger Bruce describing the tucking of pants into a knee-high boot as the last frontier of boot wearing. That frontier has been well and truly crossed during the last ten years. The current style of boot, low heeled, but with at least some shaping of the calf to follow the curve of the leg, slightly resembles designs from the late sixties, but often features accents such as buckles, studs, and straps that are not seen in earlier boots. And it is truly a mass phenomenon, embraced by celebrity and commoner alike, at a frequency far exceeding that of the OTK.

The tide may also be on the turn. “Thigh-high boots have been ubiquitous for the last few seasons,” the Daily Mail noted on December 8th of last year, but “lately we’ve noticed their popularity has given way to some classic knee-high boots.” Commenting approvingly on photos of supermodel Alessandra Ambrosio at LAX, wearing stiletto heeled Gianvito Rossi knee boots over skinny jeans, the paper urged readers to “mark our words! Knee-high boots are quickly working their way to the top of every A-lister’s capsule wardrobe so make sure you’re not without a pair this winter.”