It was also, unfortunately, one of the first targets of the campaign by women’s rights groups against what they perceived as sexist or exploitative advertising on the London underground. If you saw this, or one of the other ads for this campaign on the tube, like as not it was defaced with the statement “This image degrades women,” or a sticker asking “what are you selling?”

The answer, of course, is that they were selling boots. In this case, “they” was a British company called T. Elliott and Sons, a traditional firm of shoemakers that became enormously successful in the second half of the 1960s by adapting to the new, youth-centered market for shoes and boots. As Hillary Fawcett writes in a 2013 essay on the rise of accessories in fashion and advertising, Elliotts’ advertising was as critical to their success as their designs.

Take for example, this poster, which was intended to advertise Elliott’s “Alice” boot, a Victorian-style throwback that was enormously popular in the late 1960s (see my earlier post on this subject). From its trippy, Aubrey Beardsley-inspired graphics, created by Paul Christodoulou, the Twiggy-like girl-woman waif Alice, and the drug-friendly subtext of Lewis Carroll’s work (“one pill makes you larger, and one pill makes you small,” etc), it was the perfect distillation of the Zeitgeist. The fact that you could buy the poster for 5 shillings and stick it on your wall made it even better. 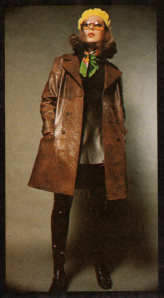 Elliotts’ boots were everywhere in the late sixties and early seventies. They crop up in fashion magazines of all shades. They even turn in in some less salubrious places, such as this 1972 pictorial from the British men’s magazine Mayfair, one of the few times I’ve seen a clothes credit on a centerfold. 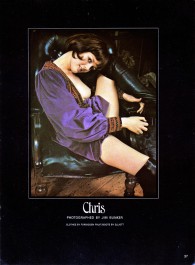 Although I grew up in London, I’m not old enough to remember that first generation of Elliott’s adverts. But I do remember that in the late 1970s (probably around 1977/78) there were huge posters for women’s thigh-boots by Elliotts on the concourse of Baker Street station. They must have made quite an impression, because I can still remember them quite clearly and recall that they were shearling-lined ones.

And then – nothing. It seems like Elliotts just dropped off the face of the Earth. Google pulls up a few references to shoes and boots reprinted from contemporary articles in the sixties, but surprisingly little for a company that had such a high profile. So whatever happened to Elliotts? I don’t know.

So there’s the challenge for those of you reading this blog that are interested in boots from this period – can you come up with more information about this company, including more images and ideally images from the 1970s? No prize, just self satisfaction. Hopefully that’ll be enough.

Fawcett, Hilary, 2013. Handbags and glad-rags: the rise and rise of accessories in fashion and advertising. in Wharton, C. (ed). Advertising as Culture. Intellect Books. ISBN 1841506141.