“Never a Dull Moment” is the title of a great book by music journalist David Hepworth. It’s his account of rock music in 1971, his thesis being that this is a pivotal year in which the era of singles-driven pop, typified by the sixties, gave way to the album-oriented rock of the seventies. You can’t argue there’s not something special about a year that saw the release of Tapestry (Carol King), Bryter Layter (Nick Drake), Sticky Fingers (the Rolling Stones), What’s Going On (Marvin Gaye), Imagine (John Lennon), Blue (Joni Mitchell), Who’s Next (the Who), Electric Warrior (T. Rex), Shaft (Isaac Hayes), Meddle (Pink Floyd), There’s a Riot Going On (Sly & the Family Stone), Fragile (Yes), Madman Across the Water (Elton John), Hunky Dory (David Bowie), and Led Zeppelin IV, to pick just 16 of Hepworth’s 100 albums of the year.

It was also, as Hepworth’s introduction reminds us, a completely different world. In Britain, there were only three television channels and one type of credit card (Barclaycard, if you’re interested). The average annual wage was £2000 and 2/3 of people did not have a bank account to pay it into. There were no cell phones, no dialing overseas without the help of an operator, and urgent news was delivered by telegram. There were few supermarkets; most people used small, local stores – butchers, greengrocers, and bakers – and had to shop several times a week. In America, gas was 36 cents a gallon, a Big Mac was 20 cents, and on Sunday night Ed Sullivan was still on T.V. Also, hot pants – shorts with an inseam of two inches or less – were everywhere.

Which brings us, neatly, to the quite wonderful image at the top of the page, which features contestants in a 1971 ‘Miss Hotpants’ contest in the Netherlands. I found it on this awesome blog, which – if you’re at all like me – will guarantee you many happily wasted hours. The picture is, in itself, evidence that 1971 was a whole different planet than the one we live on today. It’s hard to imagine anyone doing something quite as cheerfully awful as this competition in this day and age, although to be honest I haven’t gone clubbing on the Jersey shore recently. I’m sure that the high stacked coiffures on some of the contestants are not their own hair; this was also an era when the average mail order catalog would feature several pages of wigs, and even someone as staid as my 40 year-old mother would have at least one that could be whipped out for parties (black and curly, as I remember it).

Short shorts have a fashion pedigree that goes all the way back to the nineteen thirties (think of the classic pin-up photos of that era – Betty Grable and the like), and their enthusiastic adoption at the beginning of the seventies is part of the wider nostalgia for that period that was represented by stores like Biba. The actual term ‘hot pants’ is usually attributed to a 1970 article in Women’s Wear Daily, and this is certainly the year in which shorts began to attract mass attention. In the fall of 1970, the New York Times reported that “short pants are getting the fashion whirl for spring and summer. In Paris, young girls are reportedly wearing them right now, over tights, with boots and long coats.” If you want to get an idea of how common this style was, take a look at John Hendy’s pictures of London’s Kings Road during this period.

The association of boots with hot pants is a close one; for example, in the image above, 10 out of the 14 contestants pictured are wearing boots of some description, while the other four are wearing high-strapped sandals or thigh-length socks, which could be described as boot substitutes. This is not really surprising, because as we’ve discussed earlier, 1970-71 is really the high watermark of the sixties fashion boot. This is the time when boots hit peak popularity as measured by the number of mentions in the mainstream and fashion press.

There are a number of factors behind this; a worldwide rise in the price of leather provided an impetus for the development of a host of artificial substitutes with names like Corfam, Futuran, and Vynarich. Now, women could pick from boots that were smooth, shiny, dull, stretch, suede, snakeskin, alligator/crocodile, satin, or velvet. This, in turn, meant that it was possible to pair boots with a much wider range of outfits than had previously been the case, and you could afford a wardrobe of boots, because the artificial leather substitutes were much cheaper than the real thing (although this came at the cost of less durability and a shorter lifespan). You can see the effect of this in the picture from Holland – here we have a full range of styles, colors, and materials.

When they first appeared, hot pants had a certain radical chic about them; Yoko Ono was a big fan in the early years of the decade, and even Jackie Onassis was tempted, although supposedly she wore hers when yachting. But the titillation factor was just too easy to exploit. When Southwest Airlines put its flight attendants into hot pants and boots in 1971, it’s unlikely they were thinking in terms of their employees’ comfort. The committee that selected the first batch of staff included the person responsible for hiring Hugh Hefner’s “jet bunnies” and the the women hired were described as long-legged dancers, majorettes and cheerleaders with “unique personalities.” By the middle years of the decade, hot pants were hopelessly associated in the public mind with prostitutes, as can be seen in Taxi Driver (1976) and, latterly, HBO’s The Deuce (2017).

As day-to-day wear, hot pants have gone the way of public telephones, evening newspapers, milkmen, and a host of other things that Hepworth mentions in his book. To the extent that they survive at all, it is in the limited sphere of nightclubs, Hooters restaurants, and the sort of women who hang around in non-driving roles in the Fast and Furious franchise. However, there is one area of where hot pants and boots are still very much in the public eye, and that is pro-cheerleading. For some reason, perhaps associated with the demographics of NFL and NBA fans, on game days you can still see squads of gyrating dancers in clothing that would not have seemed out of place back in 1971. That might be the topic of a future post.

I just finished the final review of page proofs for the MFW book. It’s looking very good. One of the things I had to do was index the volume, which is a time-consuming, but strangely satisfying process. Anyway, I thought I’d pick an A-Z selection of words from the index (minus X, which somehow didn’t make it into the index), if only to prove to you that as fashion histories go, this one is quite wide-ranging. 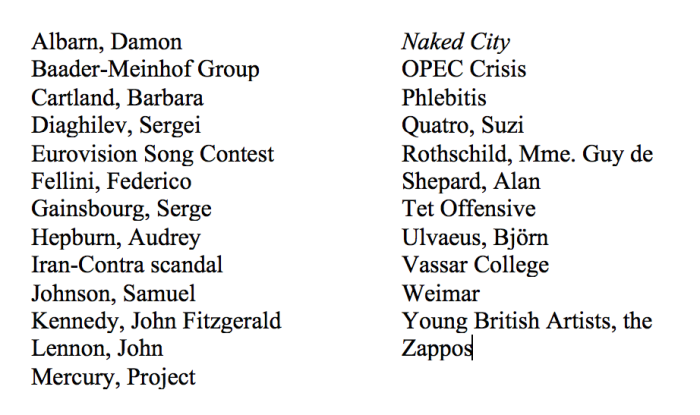