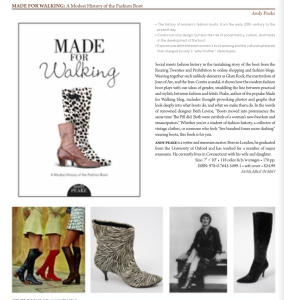 “Made for Walking” is officially published and available for sale on Amazon! You can also get a copy directly from Schiffer Publishing. Here’s a sample of what’s in store…

As she walked around the streets of Manhattan, Beth Levine had become used to the calls from passing drivers, invariably male. It was always along the same lines: they would lean out of their cars and shout something like –

The attention was not surprising, because the sight of a woman in the heart of the city wearing skirts or dresses with knee-length boots was an unusual one for the late nineteen fifties. But Levine didn’t mind. She saw it as a tribute to the boots she loved to design and wear. She was no stranger to skepticism, amusement, or in some cases outright ridicule. Levine had spent the last five years on a quest to redefine the utilitarian boot as a fashionable shoe. It was proving to be an uphill struggle. The years since the disappearance of the Russian boot in the early thirties had not been kind to the idea of a fashionable boot for women. After a brief flirtation with stylish designs, the shoe industry had concluded that the role of the boot was overwhelmingly one of protection. This was something that the rubber rain boot did much better than the leather Russian boot.

There were some short-lived attempts to revive the idea of a fashion boot. At the end of the 1930s, there was a brief revival of interest in fashionable ankle boots for women, associated with clothing that paid homage to the so-called Romantic era. They were not worn very widely, but a number of designers included them in their collections. One of the most notable examples was André Perugia, who came up with leather button boots in black or cream that are now in the collection of the Metropolitan Museum of Art, New York. But these were a rarity. For the most part, the women’s boot styles of the forties and fifties tended to be trim, ankle-length rain boots.

That had not always been the case. If you want to get a sense of what the earlier generation of rain boots for women looked like, mail order catalogs provide a useful window. The autumn/winter Kays Catalogue of 1928 shows a couple of styles of Russian boot. But by 1933, the Russian boots were gone. Instead we have two pages of rain boots. Some of these are typical Wellington boots. But the catalogue also featured “stylish” models “for city wear… extra-high shaped leg, close fitting, 1 1/2″ Cuban heels.” The leg height is 16 1/2 inches, which takes them right to the knee. And they are specifically described as “practical high-leg fashion boots“ (my emphasis); a similar pair came in two-tone rubber.

So while they may be absent from the high-end fashion press, mail order gives us a different picture; there were still knee-length fashion boots on sale in 1933. But by 1937, while Kays still offered one style of heeled and shaped-leg rain boot, most of the women’s boots featured in the catalogue the were regular “wellies.” And by 1960, all the boots shown were ankle length and, critically, were advertised as a practical option for bad weather. As far as the young and the stylish were concerned, they also had a significant image problem. For the teenage Lesley Hornby and her friends, growing up in the Northwest London suburb of Neasden, it was better to go through an entire winter with your legs frozen to the bone than wear boots. “Nobody wore boots,” Hornby, who was to become famous worldwide as sixties supermodel Twiggy, recalled. “Boots meant ankle boots, brown with a zip, the sort of things old ladies wore.”

To a large extent, this view was shared by the people that made them. Shoe manufacturers and retailers saw boots as a separate category of footwear from shoes, to be worn for protection from bad weather or for work. Unlike shoes, boots did not have to be fashionable, only practical. This was the world that Beth Levine set out to change.