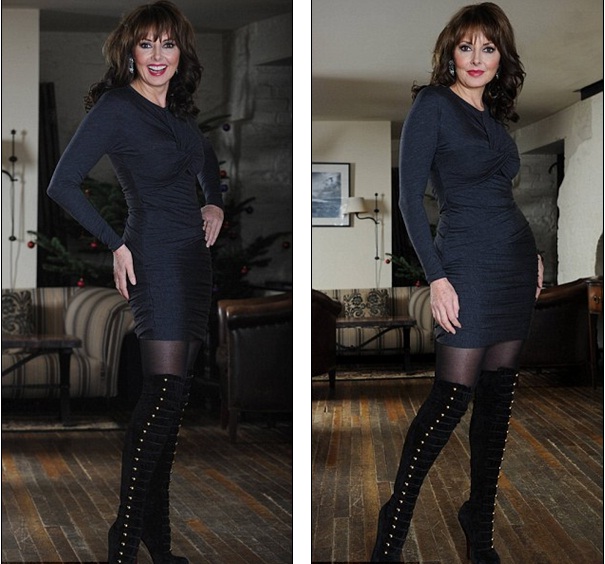 International readers may never have heard of her, but back in my homeland, Carol Vorderman MBE is a bit of a national treasure. She co-hosted the popular gameshow Countdown for 26 years (1982-2006), one of 19 TV programs she has presented; she has been a strong advocate for math education in the UK; and she is the only celebrity to have won “Rear of the Year” twice, the second time (2014) when she was 54 years old. What lifted her into the realms of this blog, however, was a rumor that I heard years ago that, when she was a student at Cambridge in the late 1970s, she was known as “Boots” Vorderman.

Obviously this was worthy of further investigation. So I turned to “It All Counts: My Story” (2010), which as you may have guessed from the title is Vorderman’s autobiography. And here is the story, as described by the lady herself. To set the scene: in October 1978, 17 year old Carol Jean Vorderman of Prestatyn, North Wales, comes up to Cambridge to read Natural Sciences at Sidney Sussex College. It is fair to say that she does not blend in to the anonymous mob of undergraduates…

“Standard uniform for all students in Cambridge in those days was a pair of jeans, a college scarf and trainers. I was absolutely determined not to change what I would normally wear just to look like everyone else. In those days I loved to dress in a 70s glam rock style. Abba were at their height, and there were definite shades of Agnetha in my day-to-day outfits.

“Pride of my wardrobe was a pair of thigh-length leather boots. I wore these boots virtually every single day, teamed with the tightest velveteen trousers, a white shirt and a matching bow tie. That’s how I got my college nickname of Boots Vorderman. Not very original, I suppose, but that’s what it was.

“If I had worn normal jeans and trainers, I would have reached my lectures at least four times faster than I did. But instead I would attempt to cycle to the engineering department with my thigh-length boots on, which made each turn of the pedals difficult. The tightly hugging trousers didn’t help much either, but I refused to be beaten. I raised the seat of my bike really high, so that I didn’t have to flex my leather-clad knees quite as much, which meant my bottom was so high from the ground that my bike resembled a penny farthing. But I didn’t care. I simply set out with plenty of time to spare and wobbled my way to lectures.”

Those of you who’ve been reading this blog for a while will know that the late 1970s saw the brief return of over-the-knee boots to mainstream fashion popularity. From 1977, when Karl Lagerfeld introduced them in his Fall collection for Chloe, through to around 1981/82, OTK boots were, if not common, than at least high profile, due in no small part to their adoption by a number of celebrities (see here for an example of this). Carol Vorderman was not famous in 1978 – that would come four years later, when she first appeared on TV – but she plainly had the fashion sensibilities of a celebrity.

And there, of course, lies the problem. It would be great to illustrate this little personal vignette of late-70s fashion history with a photo of Carol in all her Cambridge glory, but the likelihood of such photos floating around on the internet is quite low. However, it turns out that if we can’t see Boots Vorderman, we can at least see her boots. Because, as Carol notes in the book:

“Years late I wore those same boots when I was Cher in Celebrity Stars in Their Eyes, proving that a good pair of boots never dies!” 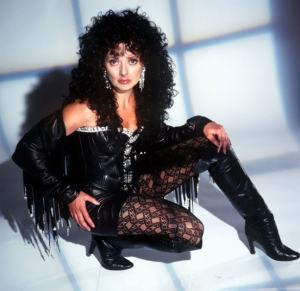 Now, even Vorderman admits that this was probably not her finest hour, being more Rocky Horror Show than Cher, but if we ignore the excess of leather and fishnet (to say nothing of the “get me out of here” look of horror on Carol’s face) we can see that this is a pretty respectable pair of late-70s thighboots, complete with flaring top, rounded toe, and slender stack heels.

As for her Cambridge education, Carol Vorderman achieved the remarkable feat of getting a third in each year of the Tripos exams, making her a member of the exclusive “Nines” club. My experience of people that get third class degrees from Oxford or Cambridge is that they almost invariably go on to greater success than those who win higher class honors, and this is certainly true for her. Not only that, but at 57 she looks as good as she did forty years ago. Keep on counting, Carol.

One thought on “Boots That Count”