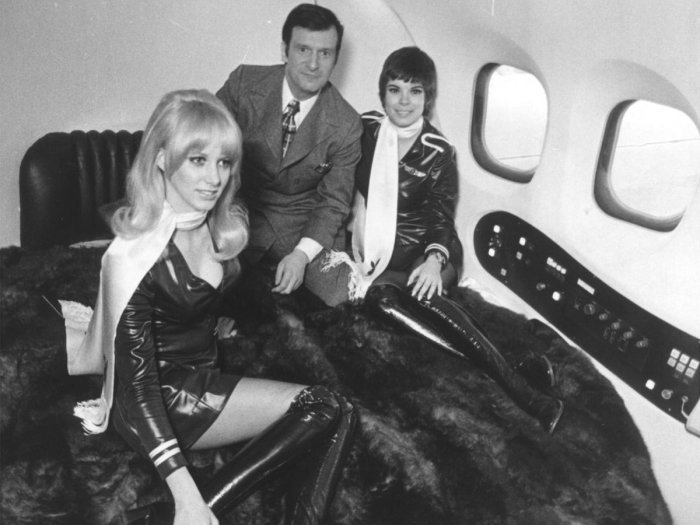 In 1969, Hugh Hefner took delivery of what may have been the most decadent corporate toy of all time. Costing a cool $9M (the equivalent of over $55M today), Hefner’s stretched DC-9 jet had 12 onboard beds, a disco, lounge, bar, sunken roman bath, a full crystal dinner set for 32 people, and – as befitted the founder of Playboy Magazine – an elliptical king-sized water bed for the boss, covered with Tasmanian opossum fur.

The “Big Bunny”, or “Hare Force One” as it was jokingly called, was painted all black with a Playboy bunny head logo on the tail. The plane carried spotlights to ensure that the logo remained illuminated in flight. Hefner and his guests could enjoy In-flight meals that included lobster and roast beef, then sit back and enjoy an entertainment system that included two film projectors and a video player.

There was also a crew of four ‘Jet Bunnies’ onboard. These were recruited from girls that had worked in the Playboy clubs in Chicago and Los Angeles and trained at Continental Airlines’ stewardess school. Hefner wanted his flight attendants to look like they had stepped out of a James Bond movie, so they wore black custom uniforms designed by Walter Holmes.

Holmes is an interesting character – the fashion historian Jonathan Walford has provided a fascinating outline biography of the designer on his blog, which you can find here. In the nineteen sixties he was living and working in Chicago, where Playboy Enterprises happened to be based. In 1968 Holmes had earned much press attention, not to mention to wrath of the Catholic Church, for a collection of nun-themed “Medieval Minis,” which may have been what attracted Hefner’s attention.

The Jet Bunny uniform is a classic product of its time. There were a couple of variants, one based on around a mini-dress, the other a tunic and pants. The material used was black, shiny, and entirely artificial – it often gets described as leather, but really it was leatherette – a fabric base treated with soft PVC. It was accessorized with a white Playboy aviator’s scarf and, because this was 1969/70, a pair of tall black boots.

The boots were also black stretch vinyl, low heeled and tall enough to just cover the knees, where they were secured with a strap and buckle. As you’ll have seen if you’ve read this blog, this was a very popular design during the years between 1968 and 1971. Sleek, tight fitting boots of this sort were part of a general move, begun by designers like Pierre Cardin, to create a more slimline silhouette for women’s clothing, suitable for a time when eyes were fixed on the future and technology was seen to hold all the answers to humanity’s problems. Not to mention that they were unabashedly sexy.

It’s not surprising that Hefner adopted this look for the Jet Bunnies. What’s more surprising is how common mini-skirts, hot pants, and boots were as uniforms for commercial flight attendants during this period. Originally I’d planned to for this piece to segue neatly into a consideration of this, but then, just this week, Hefner went and died on me. So the flight attendant piece will have to wait until the next post.

Hefner’s demise, at the ripe old age of 91, was an opportunity for various broadsheets like the New York Times and the Washington Post to lionize him as a crusader for liberal values and individual freedoms. Inevitably this led to a counterpunch from other publications, pointing out that Hefner’s values did not extend to the various young women who lived and worked with him. As Nathan Robinson succinctly put it, “Hefner wanted to be free, but he wanted to be free from government tyranny only so he could exercise a kind of unaccountable private tyranny. As with libertarianism always, ‘freedom to be a dick’ seems to be the goal.”

Which brings us back to the Jet Bunnies. Those awesome, wet look uniforms may have signified the sleek, space age ambitions of the late sixties, but they also say a lot about a world in which a wealthy man could dress women up in the way he wanted and have them on-hand to wait on him and his friends. There’s nothing wrong with hot pants and boots… it’s whether the person that’s wearing them gets to choose that’s the issue.