Back in 2014, I wrote a blog post about a British company called T. Elliott & Sons. Elliott’s were one of the major shoe companies of the sixties and seventies, and were renowned for their creative advertising. But after the eighties, they seemed to have disappeared without trace. I had spent years, on and off, combing the web for information, without success. Whatever happened to Elliott’s?

I posted my piece on Elliott’s, not expecting much in return. But then, gradually, the comments started to arrive. That notorious poster of the girl in boots on the beach? I shot that picture, said Roy Cuthbert. Those boots were hard to get on, said Tine Dorothy Kooiman; I know, because I worked in an Elliott’s store during the sixties. Me too, said Mike – I worked for Elliott’s in the late sixties and seventies. And me, said Steve Penney; I remember working through the power strikes.

It turned out there was a whole community of former Elliott’s employees out there. David Sheldon remembered selling the pop singer Lulu a pair of Spanish boots that could only be got on with a zip puller after stretching with ‘leather expander in the stockroom. The following morning, he had to get them off her as her legs had swollen “due to overnight partying.” Nicky van Tol-Williams reminisced about the “fabulous white ‘living skin’ boots” she owned in the late sixties. People remembered their old colleagues, managers, and friends.

And then, to my great surprise, we started to hear from the Elliott family themselves. Simon Elliott recalled that his father, Adrian, was saddened by the ‘this poster degrades women’ stickers that were stuck on the posters the company designed in the sixties, but delighted when the posters for shearling boots were defaced with graffiti reading ‘this poster degrades sheep.’ Adrian’s daughter, Jessica Smith, remembered going up to her dad’s office in London and trying on samples. And their brother Matthew got in touch to say that he had some of the original advertising material in his attic, which he kindly sent me and which I’ve posted here, along with images culled from the UK edition of Vogue. 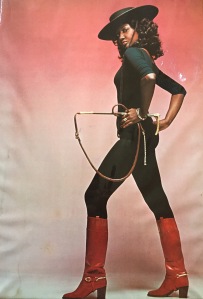 I have to say, this experience has been one of the most pleasant parts of writing the blog. On the whole, I’ve been ambivalent about giving people the ability to comment freely on web content. As far as I can tell, this blog is visited by a group of people who have only good, helpful, or informative points to add, but on many other sites that is sadly not the case. But watching a little community of people associated with Elliott’s grow up around that one blog post has been deeply satisfying. Thank you all.