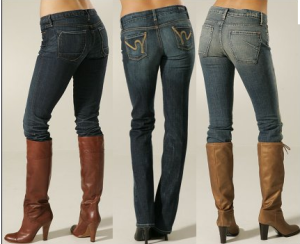 While I was trying to track down the reference to Millennial women being unable to zip up their boots due to overly-developed calf muscles for the previous post, I stumbled on another interesting article in the New York Observer, this one from January of 2005.

Nowadays, the jeans-tucked-into-tall-boots look is so commonplace, it’s hard to remember that its only been around in its current incarnation for 10 years. The Observer piece, by Anna Schneider Mayerson, takes us back to a time when this was a relative novelty.

“In Manhattan these days, it’s hard to find a girl who isn’t doing the Tuck. Across West Chelsea bars, sleek boutiques in Madison Avenue and grungy boîtes of the Lower East Side, the women of the city can be found peg-legging their jeans and parading around with them scrunched into the legs of their boots like crumpled bed sheets. They’re pulling sculpted stiletto boots up over trousers and walking around with them in plain view, like a pair of knee socks. Or they’re rolling their jeans up so that they rest just where the boot ends, thus shortening the appearance of their legs by about 40 percent. And somehow they seem to think this is a good idea.”

Note that little zinger at the end, because for all the enthusiasm of the women interviewed, there was not universal approbation for “the Tuck.” Ms. Mayerson describes it as a “frumpy-mom look that was last hot in 1982, the year of Flashdance and Gloria Vanderbilt perfume” and marshals a chorus of male disapproval:

“they do the jeans inside of their big white boots and try to do the ‘hipster rock slut’ look, but it’s also like, ‘I just moved here from Des Moines,’”

“People wore it in the 70’s. It probably looked O.K. then or it looked good then. Certain trends can come back and they can be reincarnated and look good. That one should have been left in the 70’s”

“It looks kind of medieval. It reminds me of Robin Hood and his friends, more like a costume than a stylish outfit. I don’t think it’s particularly flattering or subtle.”

“It makes the legs look stubbier. I think it’s just so much less flattering. It’s a little frame for the middle part of the body. It makes everyone look a little rounder.”

Which shows what guys know, because “the Tuck” is still going strong a decade later. The article touches on some possible reasons, the most convincing of which was the emergence of new styles of boots, less tight fitting and with heavy heels, that couldn’t be worn under pants and which required a different proportionality in outfits. But ultimately it’s just a very practical look that has stood the test of time.